Skip to content
Home/Our Blog/Does My Protein Look Big in This: Comparisons Between Detergent Solubilised and ‘SMALPed’ GPCRs.
Previous Next

Does My Protein Look Big in This: Comparisons Between Detergent Solubilised and ‘SMALPed’ GPCRs. 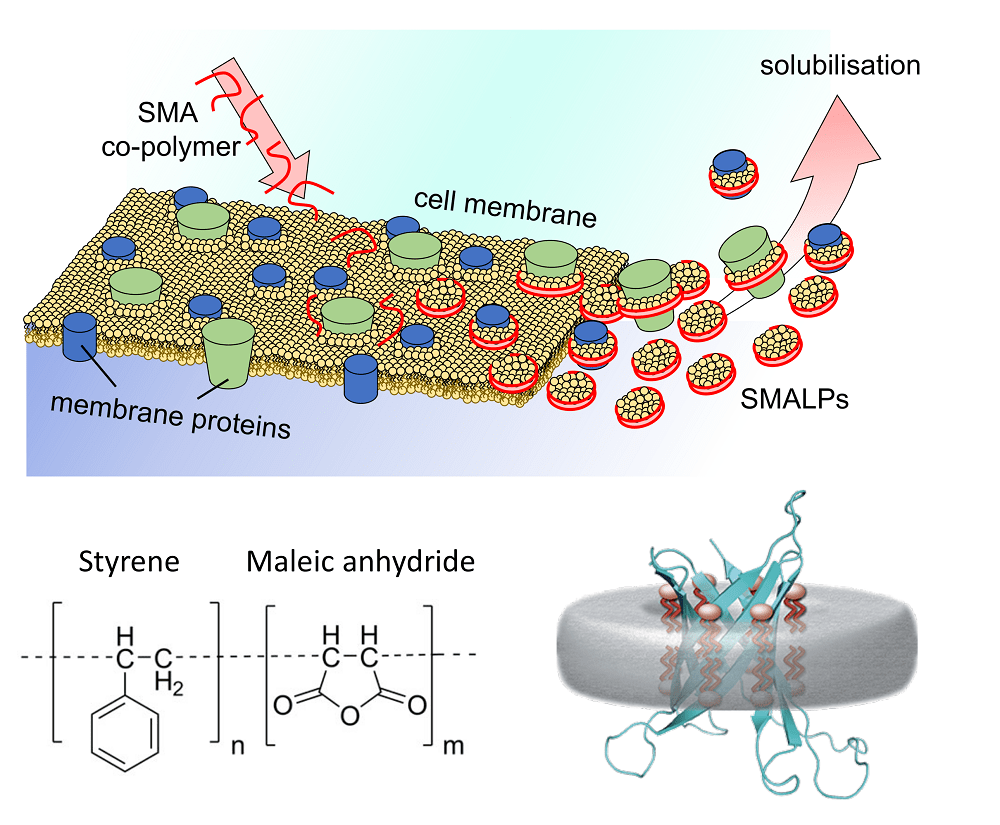 Figure 1 – Illustration of how styrene-maleic acid lipid particles (SMALPs) can solubilise membrane proteins from the membrane. They act like ‘cookie-cutters’, excising the membrane protein from the lipid bi-layer in complex with native lipids. The SMA co-polymer can be produced in different ratios of the repeating units of styrene and maleic anhydride/acid.

In this blog post, we will explore how SMALPs compare to detergent solubilised membrane proteins by showing side-by-side comparisons of our GPCR test cases (A2A, S1P1R and 5HT2A) in SMALPs or detergents. We have previously explained how we perform fluorescence size exclusion chromatography (FSEC), which provides a quick and easy method to evaluate the biophysical properties of our membrane proteins in different conditions, and this assay was an invaluable tool in our SMALP investigation.

GPCRs were solubilised in the mild detergent n-dodecyl-β-D-maltoside (DDM) in the presence or absence of cholesterol hemisuccinate (CHS), a cholesterol-like molecule with known stabilising effect on detergent solubilised GPCRs (Wiseman et al. 2020). We compared these detergent solubilised receptors with SMA solubilised ones using FSEC. For A2AR, DDM in the presence of CHS was the preferred condition as it showed the highest ratio of monomer to aggregate peak signal in the FSEC trace. Whereas, S1P1R favoured SMA solubilisation (Figure 2A). For S1P1R, it is possible that the presence of native lipids is of particular importance, as the ligand for S1P1R is a lipid after all (Dawaliby et al. 2016). Furthermore, the particular S1P1R construct used here did not have any stabilising mutations like the A2AR did. This observation serves to highlight the fact that neither the use of DDM nor SMALP is ‘one size fits all’ solution, with the best solubilisation approach being largely protein-dependent. 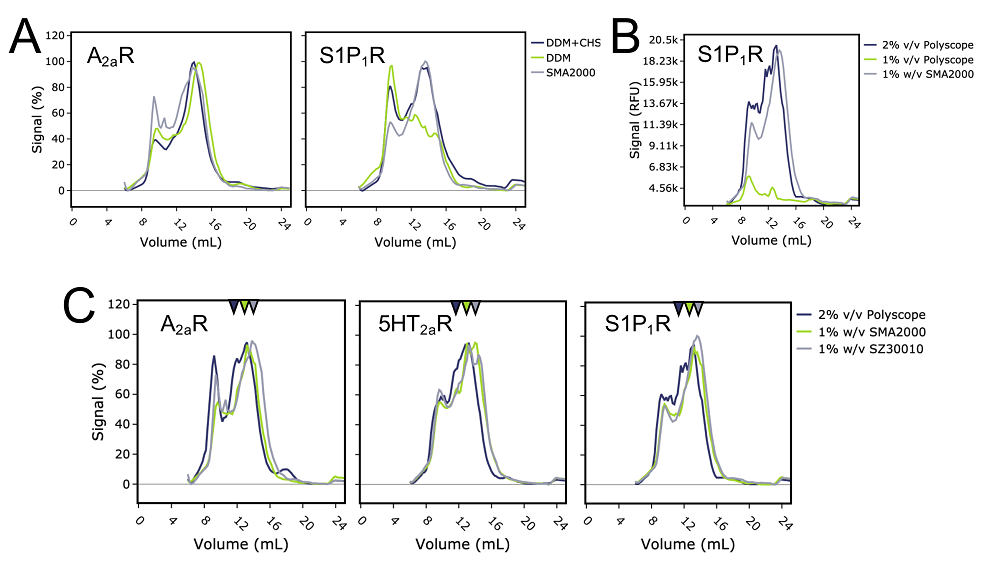 Another important parameter of SMA chemistry we wanted to understand was the effect of styrene:maleic acid ratio on the biophysical properties of SMALPs. The SMALPs used in our experiments had either a 2:1 ratio (SMA2000) or a 2.3:1 ratio (SZ30010 and commercially available equivalent SMALP 30010P supplied by Polyscope; Gulamhussein et al., 2019). We solubilised all three GPCRs using these particular SMA co-polymers and compared their FSEC traces. It is important to note that the SMA2000 and SZ30010 co-polymers were supplied to us as solid powder by our academic collaborators, whereas, the commercially available 30010P was in a liquid form. In comparison to the addition of 1% w/v of solid SMA to solubilisation mixtures, we struggled to dispense the small volumes required of the highly viscous 30010P to achieve a final concentration of 1% v/v in the solubilisation. This resulted in a very poor solubilisation of receptors in 30010P until we increased the concentration of 30010P to 2% v/v, providing a comparable solubilisation to SMA2000 (Figure 2B).

Furthermore, we also noted that for SMA 30010P and SZ30010, even though chemical similar in terms of styrene:maleic acid ratio, receptors solubilised in these SMA co-polymers behaved slightly differently to each other. In FSEC traces, receptors solubilised in SMA 30010P co-polymer displayed a split main peak for all receptors, whereas, receptors solubility in SMA2000 or SZ30010 tended to have a single monodispersed peak we assumed represented monomeric receptor (Figure 2C). SEC is a crude method, and understanding the reason for this peak splitting and what it means in terms of SMALP composition would require further investigation with techniques such as dynamic light scattering or electron microscopy. However, the fact that some 30010P SMALPs elute from the SEC column earlier than the SMA2000 and SZ30010 equivalents suggests that a portion of the molecules have a higher molecular weight. This may mean more lipids have been incorporated into these SMALPs to form larger annulus around the protein, or perhaps more than one receptor has been incorporated. Regardless, it shows that the commercially obtained 30010P from Polyscope does not perform equivalently to SZ30010 as we expected!

Another key feature of SMA solubilised protein we wanted to test was protein stability over time. We solubilised 5HT2AR with either DDM or SMA (SMA2000) and the lysates incubated at either 4˚C or at the room temperature for five days. FSEC traces were recorded at 24, 48 and 120 hours post-solubilisation. For DDM solubilised receptor we observed a progressive shift of the signal from the monodispersity peak to the aggregation peak at both 4˚C and room temperature, with the shift being most pronounced in the latter case (Figure 3A). In contrast to that, there was no noticeable change in FSEC traces for SMA-solubilised 5HT2AR, indicating that the protein remained folded through the time-course investigated (Figure 3B). These findings confirmed to us that SMALPs help to stabilise this particular GPCR for longer compared to detergent solubilised receptor. This may be extremely important for supplying protein reagent for downstream application such as surface plasmon resonance, where protein must be stable, folded and active at physiological temperatures for prolonged periods of time. 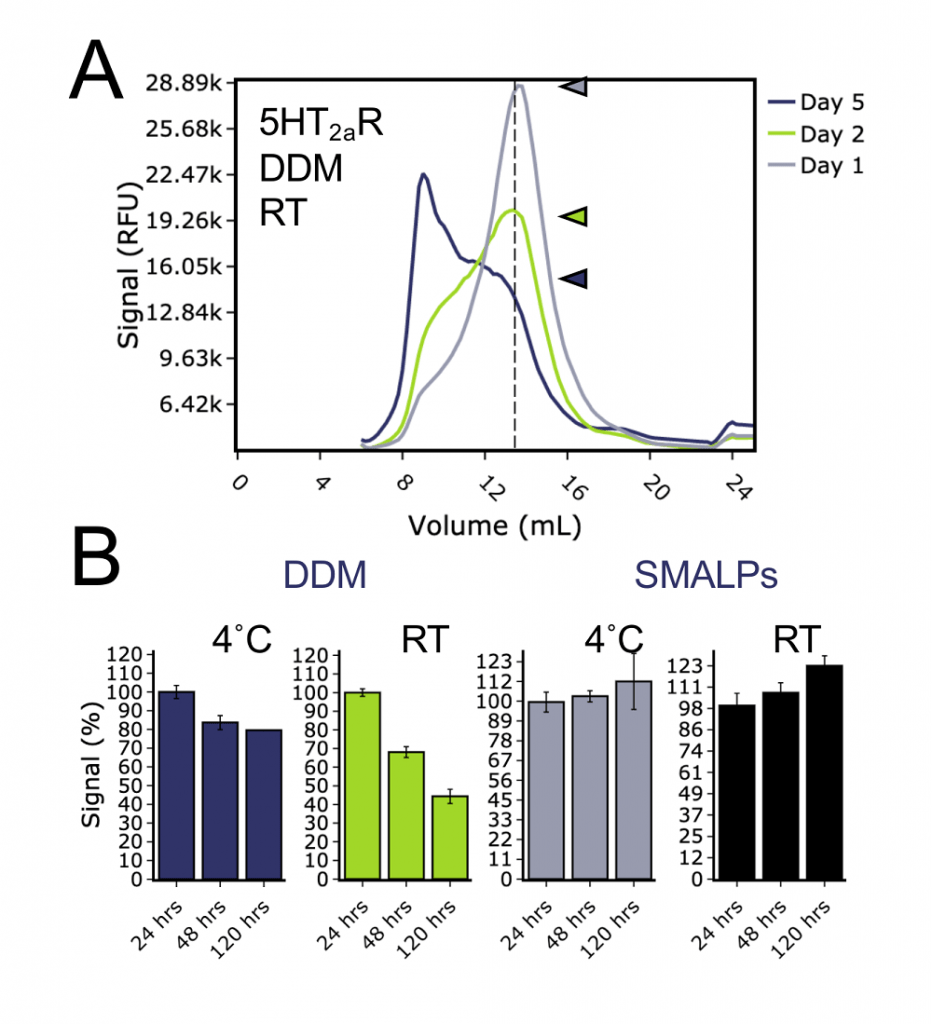 With 30% of all pharmaceuticals targeting GPCRs and concurrently the challenges associated with the production of soluble and stable GPCR protein as reagent for drug discovery, there is a need for technological advances to help solve this bottleneck. Thus, the advantages afforded by SMALPs are indisputable, especially for unstable membrane proteins; SMALPs provide a powerful additional tool in Peak Proteins’ arsenal for tackling these tricky targets!