Size exclusion chromatography (SEC), otherwise known as gel filtration chromatography, is one of the simplest and mildest methods of protein separation which is too often thought of as merely a final polishing step in a purification protocol. On the contrary, at Peak Proteins, we consider it a powerful technique which can tell you important information about your protein, as well as being an easy route to delivering in the appropriate final buffer. 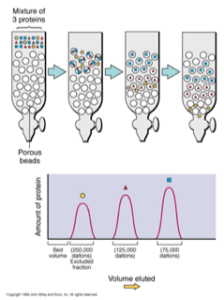 Put simply, SEC is a molecular sieve which can separate proteins, salts and small molecules based on their molecular weight. The stationary phase is a porous matrix in which molecules and that are too large to enter the pores stay in the mobile phase and move through the column with the flow of the buffer, while small molecules will enter the pores and be retained thus separating them by size. The standard readout is a chromatogram showing retention volume versus 280nm absorbance. For a more in-depth look at the fundamentals of size exclusion chromatography take a look at this helpful guide written by GE Healthcare.

Running known molecular weight standards on an SEC column is normal practice, and standard curves can be generated in order to get an idea of the weight of your sample. This is, however, only an estimate, as the relationship between hydrodynamic volume and molecular weight are not the same for all proteins. Interaction between the resin and the sample may also increase retention and mimic smaller weights (this is usually counteracted by the addition of salt to the running buffer).

While an accurate mass is hard to gain, SEC will give clear estimates of the oligomeric state of the protein. There are a range of SEC columns available which will separate monomer and dimer up to multimer, as well as removing aggregates and smaller contaminants – it’s just a case of choosing the right column based on the molecular weight of the protein, hopefully knowing a bit about how it is supposed to behave in solution, as well as having the correct sample to resin volume ratio.

Knowing where your protein alone elutes off the column can also allow for visualisation of ligand binding as the higher molecular weight complex will run faster through the column and separate from free protein and ligand. We often have clients needing to prove complexes have formed and also accurately assess the stability or purity of their products. Frequently we use small, analytical SEC columns to carry out scaled-down experiments to minimise the amount of material clients need to provide, something which we recognise can be in short supply. Analytical columns can give beautiful separation with equally attractive data outputs – nice to show in presentations and papers!

Often ignored as a purification method in its own right and only as a final polish, SEC does have its place when other methods fail. A recent example is a poorly expressed tagged protein which had been purified on an affinity column than an ion-exchange column (see our Blog on ‘Keeping the ions in the fire’) and was still extremely impure. A Superdex 75 column gave enough separation of the target protein away from the contaminants to give a small amount of >90% pure material which was sufficient quality for the client’s assay. 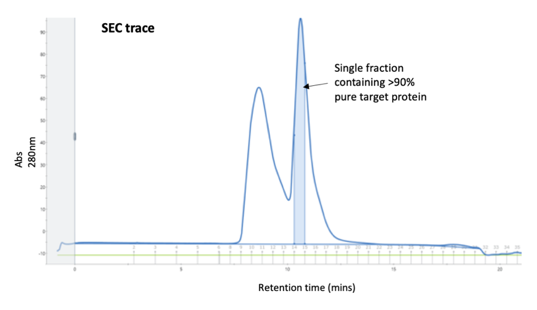 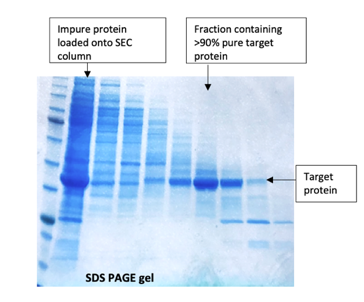 Finally, SEC is regularly used to exchange protein samples into the buffer of choice for either the next step in the purification protocol or for final client use. Standard SEC columns can be used, but more often smaller desalting columns are employed which have advantages over sample dialysis; far quicker, less buffer volume (and cost) and less risk of loss – at the final stage in the process you just want that protein safely frozen away!

Find out more about our protein expression and protein purification services or contact us directly at info@peakproteins.com.