A number of methods exist, but largely, we use a thermofluor stability assay (Figure 1). This assay relies on the properties of particular dyes that interact with proteins under certain conditions. There are two different dyes that we use: SYPRO orange, which interacts with hydrophobic pockets and patches of proteins1, and CPM which reacts with thiol groups of cysteine residues by maleimide reaction chemistry2. On association or reaction with the protein, the fluorescence quantum yields of these dyes increase. This means, fluorescent signal of dye in solution is very weak, but becomes very strong when bound to protein. In combination with a gradual temperature ramp between 20 and 100°C, fluorescence signal can be used to monitor the thermal denaturation of a protein and produce an unfolding curve. The inflection point of this curve is considered to be the apparent melting temperature (Tm) and used as a relative indicator of stability. SYPRO orange is standardly used with soluble proteins, whereas, CPM is used with membrane proteins. This distinction arises due to an incompatibility between SYPRO orange and detergent micelles.

Figure 1: Illustration of the thermofluor stability assay with SYPRO orange and CPM

More advanced uses of the thermofluor stability assay exploit differences in relative protein stability between conditions (∆Tm). This comparison is termed a thermostability shift, and is the core principal of differential scanning fluorimetry (DSF). These comparisons can provide extremely rich information about a target, far beyond just measuring melting temperature.

One such advanced use is in the optimisation of protein buffer conditions for storage, which we do routinely. Buffer pH and ionic strength can have large and interacting effects on protein stability. Thus, we use a matrix of sodium chloride concentration against buffer pH to determine the optimal combination of these two factors on protein stability as shown in Figure 2.

Another advanced use is to screen protein stability in the presence and absence of potential ligands, which can include fragments and drug lead compounds. Usually, tight and specific binding of a ligand to a protein will raise the Tm. Often, we use it during crystallisation optimisation to identify additives that may improve crystallisation. When combined with a high-throughput formulation, DSF can be an important tool in drug discovery programs. Furthermore, titration of a ligand in the stability assay can provide a proxy measure of ligand binding constants. For an example of the effect of calcium titration on the stability of a protein of interest see Figure 2.

Finally, thermostability shift assays can even be used as a tool for analysing protein function and mechanism. For example, comparison of Tm between wild-type and mutant protein can lead to important insights into key residues that perform mechanistic or catalytic functions.34 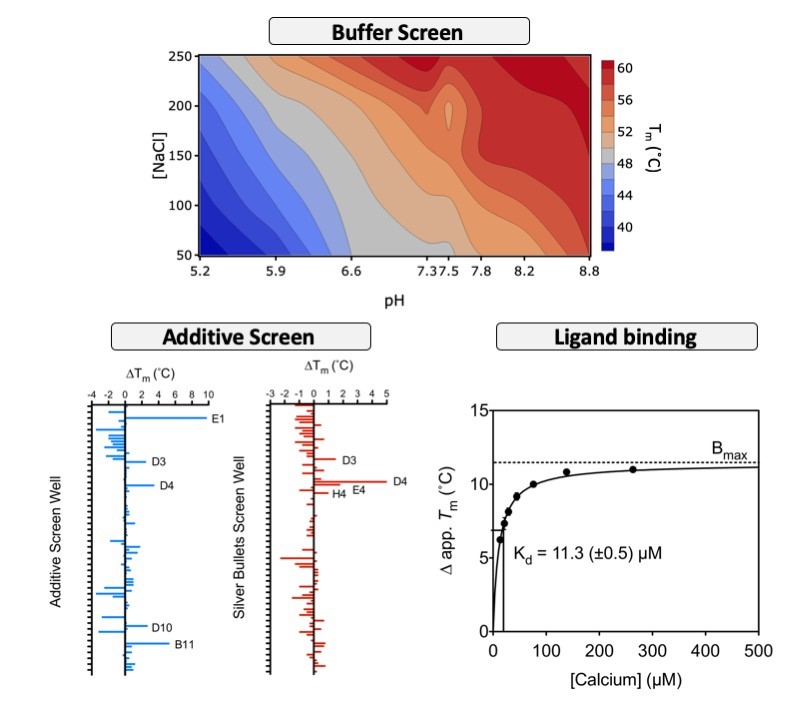 [1] Formation of a cytoplasmic salt bridge network in the matrix state is a fundamental step in the transport mechanism of the mitochondrial ADP/ATP carrier, Martin S. King et al, 2016