Expression, Purification and Biotinylation of a Heterotrimeric Protein Complex

A client requested the production of biotinylated and non-biotinylated heterotrimeric complex to support assay screening and biophysics. The protein complex plays a role in tumour suppression, and thus can be used to identify novel targeted therapies. Proteins A and B were cloned into a pET duet vector, with an AviTag sequence at the C-terminus of Protein A. These were co-expressed in E.coli with a pET28 vector containing Protein C, which contained an N-terminal 6His-TEV tag. The complex was purified using nickel affinity chromatography and the 6-His tag removed using TEV protease.  The heterotrimer was then further purified using a subtractive step, followed by ion-exchange and size-exclusion chromatography. At this point, a portion of the complex was biotinylated using biotin ligase and re-purified.

Using this methodology, we were able to purify ~30mg/L of protein complex. The complex was captured using the 6-His tag on Protein C, with all three proteins seen on SDS PAGE after purification. This, in conjunction with analytical size exclusion data, confirmed that we had purified the heterotrimeric complex (Fig.1).  After removal of the 6-His tag by TEV protease, a portion of the purified protein complex was then successfully biotinylated through the AviTag sequence on Protein A using biotin ligase.

Fig.1 (a) SDS PAGE analysis of the heterotrimeric complex before and after biotinylation shows the presence and purity of all three proteins. A slight mass shift can be seen for Protein A after biotinylation (b) A-SEC comparison to a standard curve indicates monomeric ABC and ABC-biotin complexes

At Peak Proteins we perform LCMS and MSMS routinely; not only to confirm protein expression, but also to help characterise proteins as part of the QC package. We use a Sciex ExionLC coupled to a Sciex  X500B QTOF mass spectrometer with Sciex OS and BioPharmaView  Software. The instrument is set up as open access for intact mass measurements for other protein scientists in Peak Proteins, using either a 5 or 10 minute reversed phase method. Having access to protein mass spectrometry within our lab means that we can also employ this as a tool to quickly monitor different stages of the purification and protein production processes in real time, expediting timelines and enabling us to react quickly to our data. In this project, we were able to not only confirm successful co-expression and purification of the heterotrimer but also to demonstrate TEV cleavage of the 6-His tag from Protein C, and the subsequent biotinylation of Protein A. The LCMS data is summarised in Table 1. 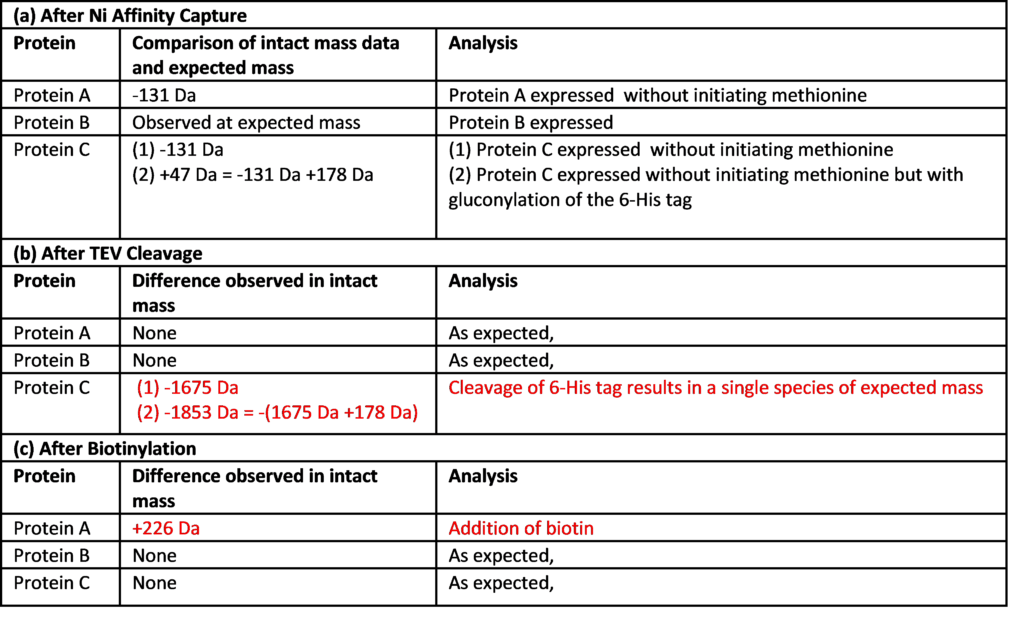 (a) All three proteins have the correct mass when adjusting for loss of Met1 (-131 Da) (b) The mass of Protein C is reduced by TEV cleavage to produce a single species of the expected mass (c) After biotinylation, Protein A is shown to have an increased mass of +226 Da, indicating the addition of a single biotin.

Our initial feasibility study, carried out to establish the methodology within our lab, enabled us to supply the client with over 5mg of both biotinylated and non-biotinylated heterotrimer for their screens in a short timeline.   The QC package provided demonstrated production and biotinylation of the complex, with the high level of protein characterisation provided by mass spectrometry helping to validate the quality of the protein complexes delivered.